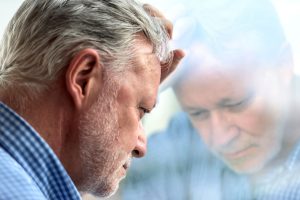 Hypnotherapy can be of great benefit to those people who suffer from a common type depression. The hypnotherapist may use a variety of techniques, which can assist a client to gain insight into the cause of why they feel depressed, or they may become aware of a psychological mechanism that has caused them to remain trapped in a ‘negative type’ thinking process. Repressed emotions relating to past experiences and events, can be uncovered and consequently realised for what they were. Then they can be released.

Depression is a mood disturbance, which usually presents as feelings of sadness, despair and discouragement. This may have resulted from, and is normally proportionate to, some personal loss or tragedy.

Depression can have a variety of origins including relationship disintegration, separation or the loss of a family member or pet. Maybe a recent redundancy, heavy financial burdens, psychological or physiological illness, to name a few. Perhaps the most easily understandable type of depression comes from having suffered a traumatic loss. Anxiety often appears along with depression, even though they can occur on their own. Sometimes it is the depression that is most prevalent, and sometimes it’s the anxiety that is the more dominant feature.

Many people experience depression at various stages during their lifetime. However, the difference between each individual and how it may affect them, is a matter of degree. Some people are able to function normally in their everyday lives, being aware of their feelings of sadness. Others tend to feel the sadness deeply, and their degree of depression is deeper. They may find it very difficult or even impossible to concentrate on the task at hand. They may even begin to feel physically ill and confine themselves to bed.

Generally, sufferers tend to come out of these depressions by themselves, after sufficient time has passed after the traumatic event. Some people may require professional counselling at various stages of a grieving cycle. Others may only require a short time and the counsel of close friends. If the depression remains, with no improvement, or they appear to be getting deeper into depression, then seek professional help.

We can describe depression in its extreme state as an abnormal emotional state, which presents as exaggerated feelings of sadness, melancholy, dejection, worthlessness, emptiness and hopelessness, that are inappropriate and out of proportion to reality. The manifestations of this state are extremely variable, and range from a slight lack of motivation and inability to concentrate, to sometimes severe physiological alterations of the body functions, and can represent a variety of psychological and physical conditions such as, symptoms associated with a particular disease or, a specific psychological illness. It can be classified as neurotic when the cause is a traumatic situation or event that is identifiable. Even though the person is unable to explain the over-reaction to it.

The condition is classified as psychotic when there is severe mental and physical functional impairment, because of some intra-psychic conflict. It is often accompanied by hallucinations, delusions, and confusion concerning time, place and identity. Deep depression can also lead to direct and indirect threats to commit suicide. Hypnotherapy is not appropriate for those who suffer with a psychosis. Hypnotherapists will generally refer this person back to their GP or directly to an appropriate health professional i.e a psychiatrist.

We can recognise common depression by symptoms including crying, insomnia, loss of sense of humour, listlessness, negative outlook, social withdrawal, desire to be alone, feelings of helplessness, inability to cope with even minor stresses, loss of sexual desire, loss of appetite, constant fatigue and lack of concentration. Because the origin of depression can be genetic, pharmacologic, glandular, infectious, nutritional, neo plastic, or neurological, the behavioural effects can appear as aggression or withdrawal, anorexia or overeating, anger or apathy, or many other types of types of responses.

Repressed anger for example, could be a cause of the depression. To not allow a child to express negative emotions, or perhaps if the child was to observe anger only in it’s violent form, he/she may learn to suppress and ignore it. He/She could then feel helpless and vulnerable – having not been able to express the anger, then use it constructively. And the easiest way to avoid any further unpleasant situations is to withdraw from the world.

A further example is ‘learned helplessness’. Being brought up in an overprotective environment where the person was neither allowed, nor taught to deal with the everyday world, can make him/her feel incompetent when he/she finally leaves that environment, and this can also lead to depression.

Note – The above information is not  ‘all encompassing’  and if you think that you or someone else may be suffering from depression – seek professional advice without delay.